Kelty returned home to a summer job as a golf cart attendant at the Chateau Whistler Golf Course. That summer he announced he would like to return to Whistler Secondary School for grade 11. He certainly had developed maturity at Notre Dame, a place where he learned his position in the hierarchy quickly, a place where he cleaned dorms and washed pots, a place where attendance at church and Christian Studies was mandatory.

All seemed to be going smoothly and we took our family on a cruise through the Panama Canal. It was there that Kelty suffered from a paranoia anxiety attack. Having never had an indication of anything like this before, we were just as shocked and distressed as he was. Kelty lay low for a couple of days and with the help of the resident priest and the ship's doctor was able to function again well enough to finish the cruise. That year he went on to complete Grade 11 with top marks and graduation honors.

Several times we asked Kelty if he had any recurring incidents. He preferred to downplay it but admitted that he feared the anxiety attack might return.

He had a terrific winter with his many friends, snow boarding, playing Midget hockey, partying and driving our cars - in a responsible way. That summer he again returned to his summer job at the Chateau Whistler where he had the opportunity to hone his promising golf game.

Surprisingly, he announced that he wished to return to Notre Dame for Grade 12. He said he wanted to rekindle the bonds with his classmates and achieve some of the academic goals that would send him off to Bishop's University. He knew Bishop's had high standards so Kelty progressed from an average student to what some would call an over achiever. His nickname at Notre Dame was "crazy" because he would get up so early to study. As well, he represented Notre Dame on the school golf team, playing in the Saskatchewan Provincials. Knowing he would never make the NHL, Kelty settled for assistant captain on the Notre Dame junior "C" team and traveled throughout the province enjoying both the game and the camaraderie. 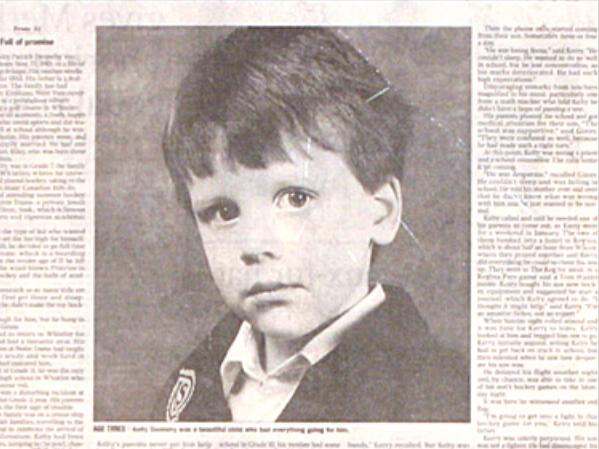